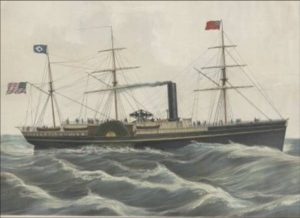 When we last left Henry…

He was on his way from New York to San Francisco in 1850; he had to cross the Isthmus of Panama. When he got to Panama City, he was to pick up another ship, which would take him to San Francisco.  However, first he had to cross the Isthmus of Panama.  Henry and some of the men traveling with him hired a man and a pack mule to guide them and transport their possessions to Panama City.  Miller when later discussing the trip stated, “We had a long sack with clothes in it, at night the natives took their mules back home and with them took a great deal of the stuff belonging to the other men.  I took special precaution to watch the mule that carried my goods and I sat up and watched him all night.”

A railroad was built in 1855, but to late to help Henry get to his next port.

When he arrived in Panama City, there was not a ship to be found.  All of the ships had weighed anchor and sailed to California, the crews had heard of the gold strike and where anxious to make their fortunes.  “Gold Fever” had struck again.