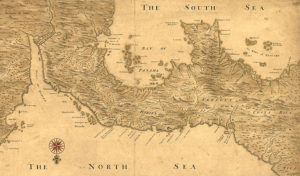 When we last left Henry…

In 1850, Panama City was over crowded due to the thousands who were waiting for a ship to arrive and take them to San Francisco, accommodations were poor and Yellow fever was raging.

When Henry Miller arrived, he found out that the town’s only butcher had fallen ill with the fever.  Henry was never one to miss an opportunity, with the assistance of some of his fellow passengers; he purchased the butchers tools and set up shop to provide meat to the stranded population.  Soon Henry and his partners were making money hand over fist.

In May of 1850, Henry got the fever and he lay in a private hospital until August.

By the time he had recovered enough to visit the shop, his inexperienced partners had ruined the business beyond hope of recovery.  Henry decided to sell out.  When all of the bills had been paid he had scarcely enough for his passage to San Francisco.  He later told people, “If I hadn’t got the fever when I was in Panama, I would have stayed there because the opportunities were very great to make money.”